The Mystery Of The Cosmic Sorrow 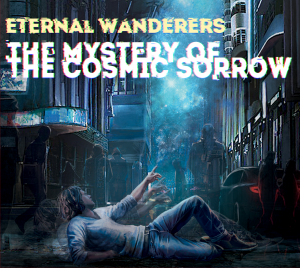 1. Following A Neutrino’s Flight
2. The End Of The Satellite Age
3. Space

“The Mystery Of The Cosmic Sorrow” is a double CD, total time 90 minutes. The album is a result of the 5-years endeavor, and it incarnates the fundamental idea of EW’s creative activity. The music style of the album is the mix of art-psychedelic rock, electronics and sympho-electronic experiment.

The edition contains the 12-pages booklet with original illustrations by Natalia Arustamova.

A man is going along a street at night, deep in thoughts, in a state of melancholy close to depression. Suddenly his conciousness grows dim, and he falls upon the asphalt pavement. The crowd of people surrounds him, the sounds of approaching ambulance are heard. But for him who is lying upon the asphalt pavement, all this buzz seems like far echos in subdued sound of the waves. His eyes are turned towards the night sky, where the cosmic abyss has yawned, and the mystery of the cosmic sorrow has been revealed…

This is the idea of the main composition of the album – The Mystery Of The Cosmic Sorrow. In other compositions in one way or another there are intertwined themes of space and natural phenomenons, and emotional state of the human soul.

Message From Space
Among cosmic chaos, sounds, scraps of radio signals suddenly there arises a clear signal like Morse code, and a distinct voice calling to reveal the mystery of the cosmic sorrow.

Methane Rain
The song is about the Saturn’s satellite Titan, about methane seas and dreadful thunderstorms, about a stranger who had lost his way, and for whom the methane rain is crying…

Gamma Waves
Gamma waves are electric impulses emitted with the human brain. They are conjugated with the peak working of consciousness, intensive mind activity, going along with such notions as “hyperconsciousness”, “hyperreality”.

Silent World
In a camp before the ascension to the top of the mountain you are looking into the sky, the bright line of the Milky Way is lost behind the mountain crest, and silence is around. then you return into the eternally buzzing city, and there the sky is shrouded with smog of fires, the heat makes deserted streets and playgrounds, and silence is around… (the composition is made under the impression from the Moscow heat 2010).

Born To Suffer
The song is about the man doomed to sufferings in spite of all efforts, hopes and struggle.

Valley Of Oblivion
It is the place the no one has ever seen. It is surrounded with mountains high as the skies, erected with cold human mind. There live those of whom some day there was such a fuss, but forgotten by everyone in eternal silence.

Following A Neutrino’s Flight
A neutrino is a lepton, an elementary particle with half-integer spin, that interacts only via the weak subatomic force and gravity. Neutrinos can be created in several ways, including  in nuclear reactions such as those that take place in the Sun, when cosmic rays hit atoms and in supernovae. About 65 billion (6.5×1010) solar neutrinos per second pass through every square centimeter perpendicular to the direction of the Sun in the region of the Earth. Neutrinos typically pass through normal matter unimpeded and undetected. Neutrinos are the only known particles that are not significantly attenuated by their travel through the interstellar medium.
(Wikipedia).

The End Of The Satellite Age
The epic sympho-electronic composition leading the listener from the 50s of the 20th century, flight of the first artificial satellite, through the Carribean crisis, the age of consumption, commerce and the cult of yuppie to the present days and fading of the space dream…

Space
The ballad about space taking the man as he or she is, with all drawbacks and sins, in whose infinity it is possible to find harmony and peace.