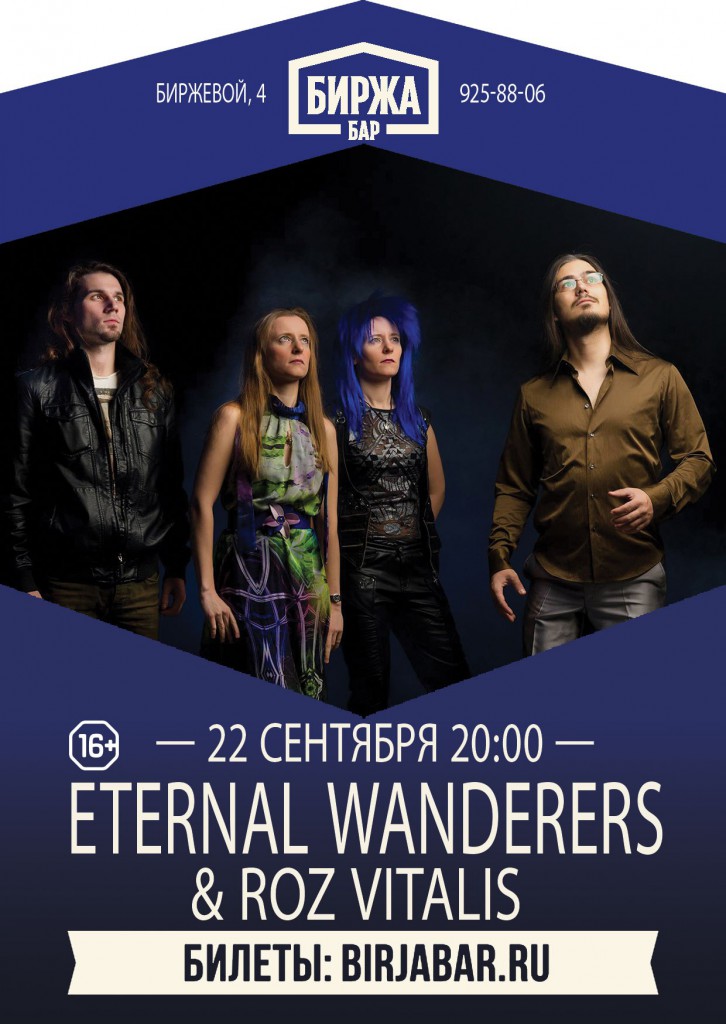 For the first time in St. Petersburg – Sep 22 – will perform the famous Moscow art-rock band ETERNAL WANDERERS. The band plays “the mix of art-psychedelic rock, electronic and sympho-electronic experiment”, and has released three studio albums at the Moscow label MALS RECORDS. The latest of them, the double CD “The Mystery Of The Cosmic Sorrow”, has been released in 2016! At the concert EW will play songs from the new album and the earlier albums.

Song of ETERNAL WANDERERS – “about Joy and Sorrow, Life and Death, about infinite Space, about the labyrinths of Consciousness, about Eternity, about the Beauty of the human soul and distant stars, about untimely vanished beautiful worlds where reality and fantasy merge into a single whole…”

Another participant of the concert will be the St. Petersburg band ROZ VITALIS. The band performs instrumental music at the crossroads of avant-garde progressive rock, traditional art-rock and space-rock. At the concert the band will play compositions from the most famous band’s albums “Patience of Hope” and “Lavoro d’amore,” and the latest material composed for a future full-length studio album.

ROZ VITALIS’ metaphysical credo – “through music to the light” and “making music to overcome the chaos.”

The festival was held in the picturesque place in the suburb of Gagarin town near Yauza reservoir in Smolensk region, Russia. EW played 6 songs as a duet of Elena Kanevskaya and Dmitry Shtatnov. Dmitry played acoustic guitar at “Valley Of Oblivion” and “Space”. We much enjoined playing “Following A Neutrino’s Flight” with slide guitar, e-bow and spacial effects. Then came a surprise – introducing a new song arranged with pads and sitar. “Invested With Mystery” is a song about eternal and transient things written 20 years ago. We’re going to record it for the new album. The next song Dima accompanied on piano. As “Invested With Mystery”, this song had been prepared specially for the festival and was performed for the first time. It was a song called “Eternal Wanderer” written 20 years ago that actually gave rise to EW’s musical project. For “And I Will Follow” Dima again took an acoustic guitar and turned on a simple groove-box pattern.
We managed to record some video. Perhaps, the quality of video should have been better, but at any rate it’s a good memory of this maybe exclusive duet performance.